A greener UK after Brexit? 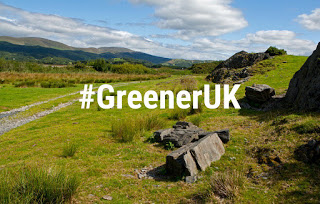 The environmental movement has come together to launch Greener UK a major cross sectoral campaign to ensure that Brexit delivers stronger environmental protection across the UK. Greener UK comprises 13 major environmental organisations with a combined public membership of nearly 8 million. It replaces Environmentalists for Europe, a cross sectoral alliance which campaigned during the referendum, as the sector’s main voice on all matters related to Brexit.

One of the centrepieces of the Campaign is a Pledge for the Environment, which has currently been signed by 145 MPs (around 23% of the total).  Those making the pledge endeavour to do everything in their power to ensure that the UK:

These pledges echo a number of demands made by the sector in the immediate aftermath of the shock vote to leave the EU.  The CEOs of the core coalition have also written a letter in The Times today, alongside a full page advert.

The Campaign has already started to target key ministries.  Late last month, members of the campaign met with Robin Walker, Minister in the Department for Exiting the EU, who said that the Government would “use the unique opportunity exiting the EU affords to design the most effective framework in the UK for driving environmental improvement – delivering on our goal to put Britain at the vanguard of tackling global environmental challenges, from conservation to climate change.”

So far, so positive.  But Brexit will be a long and very drawn out process, not a single event.  Greener UK aims to raise the profile of the environment in that process.  It starts from a decidedly low base.  The environment was barely mentioned in David Cameron’s doomed attempt to secure a New Settlement with the EU prior to the referendum.  And despite efforts by some of the groups, the environment was not a decisive issue during the campaign. In fact, some of the largest environmental groups consciously decided not to turn it into a high profile issue – they studiously maintained a low profile and did not actively campaign for either side.

Tactics and alliances are now being rethought

It is telling that some of the environmental organisations that maintained a low profile during the referendum are now participating in Greener UK.  The launch of Greener UK is an explicit recognition that nothing associated with the status quo can be taken for granted, particularly if, as seems very likely, the eventual direction of Brexit is determined by the grand bargain that the EU and the UK strike on two issues: single market access and the free movement of people.

There is certainly a lot of work to be done if Brexit is even to maintain current levels of environmental protection, let alone establish higher ones.  Brexit undoubtedly generates some important opportunities for the environmental sector in that respect, but it also poses some very significant risks. Fisheries, agriculture and environmental policies will all have to be significantly re-designed, irrespective of whether the Brexit is hard or soft.  The fact that these are devolved matters only adds to the pressures imposed on DEFRA – the department for the environment, food and rural affairs.

Is Whitehall up to the job of greening Brexit?

It is widely believed that amongst the main Whitehall departments, DEFRA stands to be the most heavily impacted by Brexit. This week, the trade magazine ENDS revealed that at least 298 (or 17%) of its core staff left since the EU referendum was announced.  Drawing on data revealed by freedom of information requests, it has shown that around 25 of the department’s 65 most senior members of staff left as part of these changes.  This does not sound especially worrying, until one remembers that DEFRA was already being cut before the vote.  In July, ENDS revealed that DEFRA had actually lost two thirds of its entire staff since 2006.

2017 will bring many challenges: Article 50; the Great Repeal Bill; pre-negotiations to establish new trading relationships.  Time will tell whether UK environmental policy emerges from it all stronger and revitalised.  One thing is, however, already abundantly clear: the launch of Greener UK comes at a point in time when the fate of UK policy is more uncertain that it has been at any time in the last 30 years.