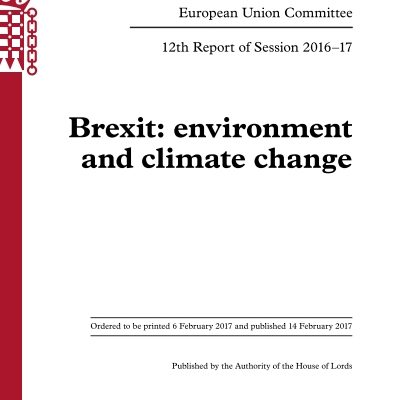 It covers a wide range of topics, from providing a short history of the development of EU environmental policy to discussing trade implications and future UK influence. The report reiterates and expands on some well-known issues — for example, the need to apply equivalent environmental standards to trade with the EU, the risk that all of DEFRA’s time and energy will be spent on dealing with Brexit, and the particular need for continued cooperation in environmental matters alongside the Northern Irish-Irish border. Out of the many issues raised, the following were particularly striking.

The report as a ‘patchwork quilt’ of different types of legislation, adopted at different periods of time under varying legal basis. It argues that ‘the EU’s environmental acquis is more than a corpus of law: it is also a complex but effective trans-national system of governance and enforcement.’

At the heart of this system you will find the European Commission (notably regarding monitoring implementation) and the European Court of Justice (concerning infraction proceedings for example). How will such a system be replaced in the future?

The UK government is ‘worryingly complacent’ about this potential governance gap

The need to consider governance arrangements is well known. As former LibDem MEP Andrew Duff explained last week ‘the legal effect of EU regulations and directives if orphaned from the executive, legislative and judicial institutions which spawned them will be dubious at best and jeopardised at worst.’ In the environmental field, Green MP Caroline Lucas has called earlier this week for ‘an independent body to ensure UK compliance with environmental regulation’.

But the House of Lords report show that these calls have not — not yet? — been heard by government. The report is particularly damning on this issue. It finds that ‘the Government’s confidence in its ability to ‘hold itself to account’ contrasts with the concern expressed by the vast majority of our witnesses’ and argues that:

The report furthermore identifies additional governance challenges, in the coordination with the devolved administrations:

The report explores future UK influence and finds that, with the UK leaving the EU, the UK government will lose tremendous influence — a seat at the table, voting rights etc. — when it comes to decide new legislation. This matters as, for trade purposes, the UK may need to closely follow EU policy developments in key fields such as chemicals, pesticides etc. This dependence on back channels and non-state actor appears at odd with aims to ‘take back control’ of UK laws.