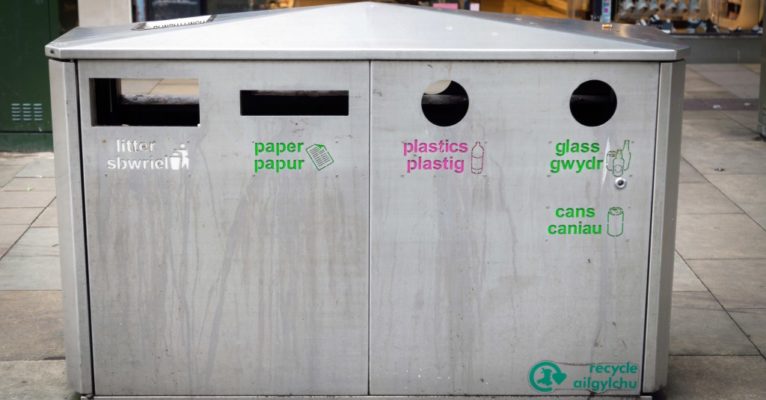 A Welsh and English Bilingual recycling bin worded in both languages.

While it is possible that UK policy will continue to track the progress made by EU-level policies for a circular economy, a combination of Westminster government distraction, limited capacity and deregulatory ethos might lead to a flatlining of performance, in which recycling fails to increase and incineration takes up the slack. Whether devolved governments like Wales, with its ‘zero waste’ ambitions can become drivers for cross-UK progress will depend increasingly on interactions with Westminster. Professor Richard Cowell examines the potential fate of waste policy in the UK as we leave the EU.

Predicting what might happen to UK environmental policy as we leave the EU is a Rumsfeldian jigsaw of known unknowns and unknown unknowns, and the recent General Election has only added to the uncertainty. Nevertheless, the long-term nature of the task of promoting sustainability makes it vital to think throughpotential pathways for future environmental policy.

A major fear among environmental organisations has been that Brexit will lead to a weakening of UK environmental policy to facilitate growth and competitiveness. But is this likely and by what combination of factors could it come about?

It is possible to address some of these issues through examining waste policy.

An important sector in its own right, waste management in the UK epitomises the UK’s transition from ‘dirty man of Europe’ to something greener and more respectable. EU legislation has been a critical factor, helping to drive waste management away from landfill towards increased recycling and tighter environmental protection.

To understand how waste policy might be affected by Brexit, it is first useful to recognise that change has multiple, intersecting dimensions.

Starting with legislation, waste is affected by some 600 pieces of EU legislation. Some apply to target setting for disposal options, such as for landfill or recycling. Some provide rules for safe handling of certain wastes, and some apply to packaging and products. Although the government’s Repeal Bill promises that all EU law will be transposed into UK law at the end of Brexit negotiations, thereafter the different legislative areas may be subject to different pressures for change or continuity. Some aspects of waste may still be governed by rules for international trade, others not.

Then there is the territorial dimension of change: who decides what the policy goals should be, and for what territorial area? The devolution angle is vital here: much waste and environment policy is devolved and, as EU constraints get looser, new questions arise about whether and how policy should be coordinated across the UK as well as with Europe and the wider world.

However, almost lost in the legal and constitutional wrangling are substantive questions: what should inform the goals of waste policy? Should it be sustainability-driven ideals of ‘zero waste’, should it reflect a cost-effective balance between environmental and economic considerations, or is the pursuit of sustainable ways of addressing waste a ‘burden’ on competitiveness to be minimised?

In thinking about the politics of what happens next, we also need to understand who the key actors are. Those involved in waste include government at all levels, the public and business, although the latter fall into two camps.

There is the waste and resource management sector, who earn revenues from handling waste (landfill, recycled materials, incineration and energy recovery) and whose economic opportunities are defined by waste regulation.

But there is also a larger, more diffuse set of businesses – manufacturers, retailers – that might be urged to take responsibility for waste issues created by their products and to keep them out of waste streams, or who might regard such steps as burdensome. The interaction between these actors and government will be critical as a new model of waste management post Brexit is defined.

Scenarios for the future?

In our report we group potential future policy pathways into three sets:

Here it is assumed that UK waste policy continues to track that of the EU, which means principally Europe’s ‘Circular Economy Package’ of new legislation, with its targets for reducing landfill and upping recycling to 70% by 2030. This legislation may be transposed into UK law while Brexit is negotiated, or alignment might be seen as desirable to enable waste and waste-derived products to continue being traded to the EU (the UK exports a lot of refuse-derived fuel).

Working against this scenario is that, once outside the EU, the UK would lose the scope to influence how EU policy develops. Moreover, in the UK there are voices in industry, government and think tanks that regard the Circular Economy Package as costly, its recycling targets as unachievable and, more widely, that EU policy has excessively emphasised environmental agendas over economic competitiveness.

In this scenario, waste policy after Brexit is shaped by a deregulatory governmental ethos and environmental performance ceases to improve. This may be especially apparent in the sphere of producer responsibility, with governments being disinclined to mandate that firms take responsibility for their waste, leaving outcomes to the serendipity of business self interest, and public and NGO pressure.

Actual weakening of regulation may occur more by default than design, as a combination of limited government interest in waste, limited government capacity and resources and the loss of EU mechanisms for accountability and enforcement together lead to a flat-lining of performance. Waste recycling rates in England are already stagnating and austerity is affecting local authority choices.

However, various factors might work against a downward slide. The desirability of trade in waste-based products brings with it the need to meet standards, whether that is with the EU or further afield. For example in Chinese markets where they are demanding increasingly high quality recyclates.

Few in the waste sector believe that Brexit will see a return to the unpopular practice of landfilling, but more incineration and energy from waste could fit neatly into a post-Brexit Britain looking for convenient solutions.

Brexit optimists present it as an opportunity to re-think UK policy and do something better, but will there be environmental dividends in the waste sector?

This is uncertain. Most criticisms of EU policy have been economic rather than environmental, apart from criticising the use of weight-based targets. Nevertheless, one should expect high profile NGO campaigns targeting specific forms of waste to continue, as with plastic waste in marine environments.

There is also the rise of a new narrative on the block, often advocated by waste industry voices, that post-Brexit the UK should give more attention to ‘national resource security’, and take steps therefore to construct a circular economy that extracts greater value from waste arising within our borders.

Action by the devolved governments gives intriguing insights into how legislative, territorial and substantial dimensions of change could interact. In Wales for example, its significant devolved powers have been used to drive much higher recycling rates and a ‘zero waste’ mission, framed by clear Welsh legislation and strategy. Though this gives Wales’s waste policy some insulation from the direct legislative uncertainties of Brexit, interactions with England become highly important. For Wales to attain its goals for waste requires firm action on producer responsibility (around packaging, product standards etc), but legislation in these areas is not devolved. Being small in scale, Welsh interests may have difficulty winning arguments for ambitious waste policy in these areas, especially if Westminster remains largely deregulatory in its approach. By such complex dynamics, Brexit could end up stymieing Welsh ambition.

While these scenarios are not predictions, looking more closely at the waste sector alerts us to issues of wider relevance to the future evolution of UK environmental policy beyond Brexit.

Differential outcomes may arise between elements of policy rooted in national territory and those for traded products, but this will affect intra-UK policy dynamics around the devolved governments as well as those governing relations between the UK, the EU and the wider world.

What is also clear is that weaving through the labyrinthine detail and short-termist politics of the Brexit process are more fundamental questions that need confronting. What is the public value of regulation? Does voluntary action by business take us to sustainability? How is action by the different parts of the UK to be coordinated?

The answer to these questions may lie in a more in-depth look at understanding the complex dimensions of change, the actors involved, and the arguments they might use to press for change.

The post draws from a more detailed research report, Assessing the Impact of Brexit on the UK Waste Resource Management Sector. The post represents the views of the author and neither those of the Welsh Brexit blog, nor Cardiff University.