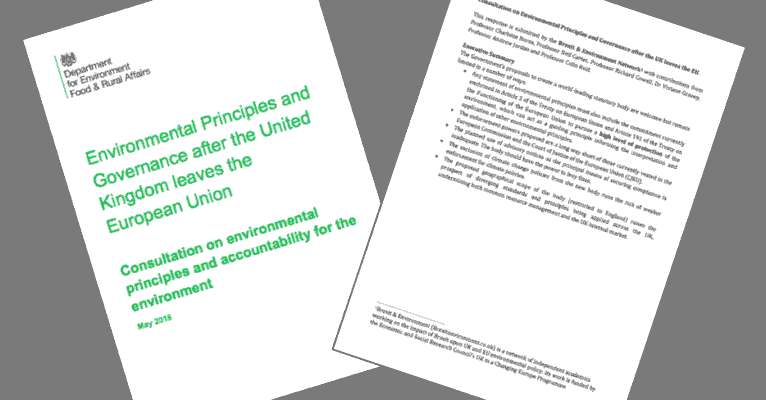 From 10 May to 2 August 2018, the UK’s Department for Environment, Food and Rural Affairs (Defra) ran a public consultation on post-Brexit environmental principles and governance. The members of the Brexit and Environment network submitted written evidence to the consultation summarizing our researchers’ advice on this topic, informed by the network’s academic research and parliamentary evidence. This blog post presents four key messages from that submission.

2. The environmental watchdog should be given stronger enforcement powers: The enforcement powers proposed for the watchdog fall far short of those currently vested in the European Commission and the Court of Justice of the European Union (CJEU). The planned use of advisory notices as the principal means of securing compliance is inadequate. The body should have the power to levy fines against the government, local authorities, and arms-length bodies. Fines have a strong deterrent effect; they focus the minds of ministers and civil servants in a way that domestic judicial review proceedings do not.

3. The environmental watchdog’s remit should include climate change policy: In its consultation document, Defra suggested that the watchdog would not be responsible for climate policy. However, this would raise the risk of weaker enforcement of climate policy. Moreover, this approach is not supported by the Committee on Climate Change (CCC). The watchdog should include climate change policy and coordinate with the CCC to ensure that all environmental legislation is subject to the same standards and enforcement regime. Indeed, the new body could use CCC reports to press the Government to take the necessary actions to meet its commitments under the Climate Change Act.

Further discussion of each of these topics and others can be found in Brexit and Environment’s written evidence.

Brendan Moore is the Brexit and Environment network coordinator.